The 1940s were the beginning of Sears, Roebuck & Company's decades-long association with electric guitars.  The late 30s had seen plenty of 'Hawaiian' lap steel instruments and amps to go with, but 1941 marked the first year you could get a strummable, pickable electric six-string in the catalog. The selections were limited, the technology primitive, but the seeds were sown.

From these humble beginnings, Sears became the company to go to for inexpensive, easy to play, easy to pay electric guitars. 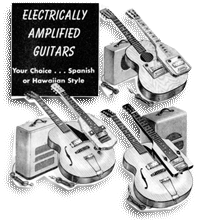